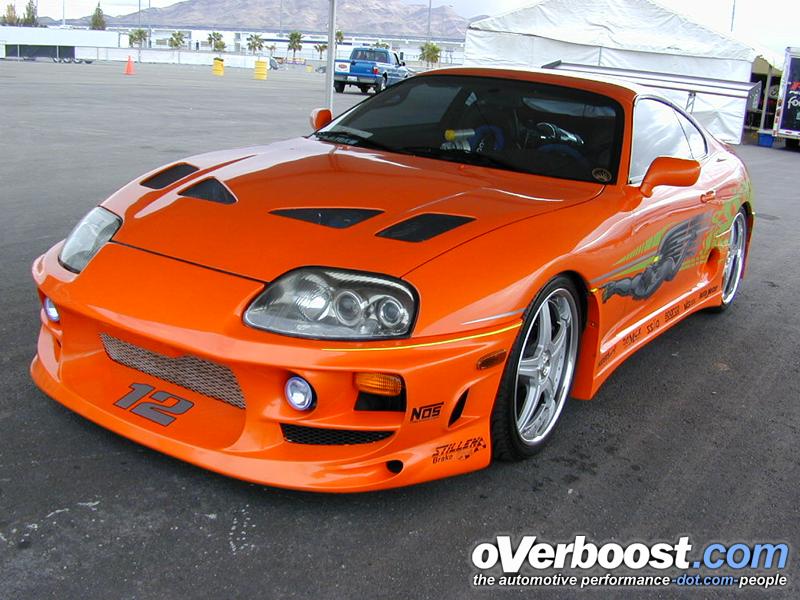 You can read all the particulars below, but first let me wax eloquently in regards to this RARE car. At SupraStore.com we understand Supra's and their value better than anyone in the World. This is why the worlds most incredible Supra's are listed for sale here. When Universal Pictures required an incredible looking (WILD is what they asked for) engine to be used for scenes in the movie, who do you think they came to? You are right, they came to SupraStore.com. We provided the mock-up red motor that you will see in the movie. When Craig Lieberman wanted to sell this incredible car, which appears in the same Universal Pictures movie, who do you think he came to? Yes, SupraStore.com.

The Supra is an interesting bread of car, capable of incredible performance (handling, hp, torque), and with a very unique look. The resale market for Supra's is incredible!! Every day we have people looking for these cars. Take a look at this car from the upcoming movie, "The Fast and the Furious". In it's modified form it has over 700hp and is as faster than any production car in the world (and yes, it would give a McClaren F1 a run for it's money). This car has Lexus reliability and robustness (can be a daily-driver, but who would?), Viper GTS destroying power delivery and torches the skidpad with a 1.0+ G's performance on street tires. It has all the creature comforts, including air conditioning, cruise control, and power everything. As the owner of SupraStore.com and driver of a 800HP Supra (w/competition stereo), I understand quality. This car is quality from top to bottom.

Energy Suspension urethane bushings all around

Ш As featured in: The Fast and the Furious (aka Redline), the movie. Stars car, main car in movie

The current owner purchased this 1994 Toyota Supra in 1998 with 54,000 miles on the clock. Previously owned by a business-man, the car was totally unmodified when sold to the current owner. However, that was soon to change.

Immediately upon acquisition, the car underwent a host of modifications in the interest of using the car for advertising and promotion. Companies such as Greddy, Eibach, Stillen, Clarion and NOS were all participants in this project. The first round of modifications included new candy yellow paint, 18 wheels/tires, a mild sound system upgrade and some body kit components, plus engine detailing. The car then toured the show circuit, doing quite well. At least 6 major magazine features were done on the car.

Over that winter, the car underwent its next round of modifications. The Supra was treated to a custom spec T-66 turbo, done by Vinny Ten, owner of the worlds fastest Supra. Nitrous Oxide Systems installed a custom NOS system, Greddy installed some of their trick components and Stillen installed their Formula 1 AP Racing brakes. Custom interior touches were added as well as a new audio/video system comprised of three TV monitors, a VCR, a DVD, Playstation and custom neon glasswork, courtesy of Audio Options. The engine was completely detailed, chromed and polished. All of the performance modifications received inspection and final tuning by a Toyota-Engineer specializing in Supra Turbo engines and performance applications.

The car then competed in the First Annual Ultimate Street Car Challenge, a grueling drag race, auto cross and car show, all in one weekend. The car took 1st Place Overall. The car also began to tour the show circuit for the balance of 1999. Its crowning achievement was the receipt of the prestigious Meguiars Hottest Car of the Year award in 1999. The car also won Best of Show in numerous events around the country, scored several first place finishes and has even received features on KABC and KTLA local news broadcasts. But the best was yet to come.

In the Spring of 2000, the car was spotted by recruiters for Universal Pictures and was selected to be the primary car for the upcoming blockbuster, The Fast and the Furious. Universal rented the car and began to alter its appearance to for an even more aggressive look. Lamborghini orange paint was applied (the only car in the movie to receive an actual high-quality paint job), as was a new Bomex body kit (the first of its kind, imported from Japan). New 19 wheels were added, as well as a new rear wing, a new TRD hood and some one-off Troy Lee graphics. The studio then set out to build 5 cosmetic replicas, shown in various stages of completion, all designed to replicate this original. All replicas were destroyed during the filming of the movie.

This Supra is the primary car in the movie.the script is virtually built around the car. This particular car was driven by one of the stars, Paul Walker and was used for all the glamour and close-up shots.

Upon completion of the motion picture, the car was returned to the owner with no damage, having been carefully protected by the films Transportation Managers. Numerous 8 x 10 photos were provided to the owner showing the car in action during the movie, as was a host of other souvenirs. The owner also served as Technical Advisor on the picture and provided dialog assistance for the script.

The car is scheduled to appear at the Hollywood Premier, set for early Summer and at a Press Junket for broadcast media in early March. In the interim, the car is touring the show circuit on behalf of Universal Pictures to promote the movie.

The car has been carefully prepared, serviced and maintained throughout the last two years and while making its show appearances. It is sure to be a collectors item, with its value placed at over $150,000.

The car currently is actually driven and it has almost 60,000 miles on it and still retains the A/C, tilt, cruise and full amenities. It has always been garaged, is hand polished weekly and is totally reliable. It is never raced or abused. Careful attention was paid to every detail so as to ensure the utmost reliability and driveability.